How System Requirements for Browsing the Internet Have Changed - 2 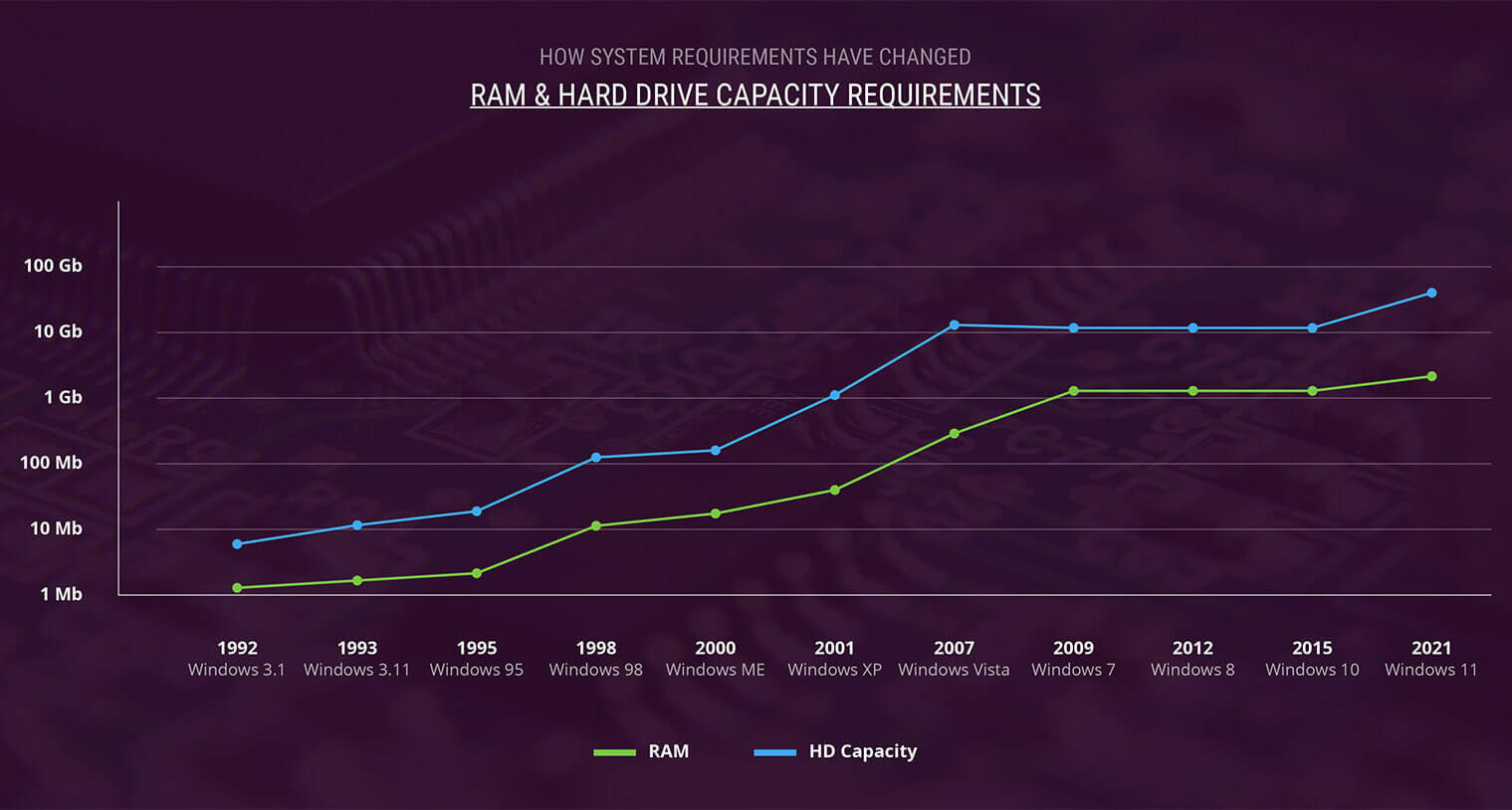 The near-exponential rise in maximum Internet connection speeds of the past 30 years is only a part of the picture of how the technology that underpins the web-browsing experience has changed. At the same time, the capabilities of the hardware available for people to use to browse have vastly increased. As a result, operating systems and the web browsers that serve as the interface between them and the web itself have become ever more demanding of that hardware, extending their own functionality significantly, facilitated by the increased abilities of typical end-users’ computers.

At the time of the launch of the World Wide Web in 1993, the adoption of mobile phones was in its infancy still. There were very few users at all in the UK, and those that were in private hands were entirely incapable of connecting to the Internet; they were just wireless telephones. In fact, it was not before the launch of the Nokia 9000 Communicator in 1996 that any mobile phone could connect to the Internet, and it was too expensive a product to have mass commercial appeal. Smartphones did not begin to get used by most businesspeople until after 2002; and it was arguably only with the launch of the first-generation iPhone by Apple in 2007 that the trend to accessing the Internet from mobile phones began to take root among consumers.

Before the iPhone, in the overwhelming majority of cases, a computer was a prerequisite for households wanting to connect to the Internet. For most people, this was either an IBM-compatible Personal Computer (usually abbreviated to PC) or an Apple Macintosh (commonly known as a Mac).

Throughout the 1990s, 2000s and 2010s, by far the most widely used operating system for PCs has been some version of Microsoft Windows. We have therefore adopted Windows as the main focus of our case study here.

In May 1990, singer Morrisey released his rather terrifying-sounding single November Spawned a Monster, which spent two weeks in the UK Top 20 before sinking like a stone and vanishing from the Top 40 in its third week of release. We don’t think he was referring to Windows, although the first version was in fact released in the month of November, in 1985. Still, since those early days, Windows has grown and grown until it has become, well, somewhat frighteningly colossal. So there are seeming parallels all the same.

We have reviewed the hardware system requirements of successive versions of this OS since the launch of the World Wide Web, and it shows that the latest version, Windows 11, uses far more system resources than would have been available at any price back in 1993.

At the start of 1993, the standard operating system for PCs was still Windows 3.1. This required 2 Mb of Random Access Memory (RAM), and a hard drive with a capacity of 8 Mb.

Both Windows 3.1 and Windows 3.11 had to be used in combination with MS-DOS, whose primitive-looking command line prompt took on the role of allowing functions such as the formatting of the then-standard 1.44 Mb floppy disk drives and the installation of programs from them.

With the launch of Windows 95 in 1995, the RAM requirement further increased to 4 Mb and the hard drive space requirement more than doubled to 35 Mb, earning it a reputation as ‘bloatware’ in PC user circles, since it now required almost four times as much drive space as Windows 3.1 had done.

Windows 95 was plagued with reliability problems from the time of its launch, with users frequently encountering hard crashes accompanied by messages of 'Fatal Exception at.... [memory address]', leading to a need to completely reboot the operating system. Some such issues were linked to the way Windows 95 interfaced with the then-popular IBM Cyrix processors, a budget-friendly alternative to Intel Pentium processors, which were offputtingly premium-priced although recommended.

In spite of its reliability problems, Windows 95 was an attractive consumer proposition in other respects, as it was an all-singing, all-dancing operating system by the standards of its time. For the first time in the history of Windows, it was no longer necessary to use the user-hostile command-line prompt in MS DOS for core file-handling operations; and an integral CD audio player interfaced with the CD-Rom drives then typically fitted to new desktop and laptop computers, allowing users to listen to their favourite music while working or while playing games.

What's more, Windows 95 offered the convenience of allowing software delivered on CD-Rom, including Windows itself, to automatically load as soon as the CD tray was closed, making installation easy and putting an end to the days of users having to use the manual command line prompt to load programs.

The enhanced user experience offered by Win 95 seemed to some degree to justify its greatly increased requirements upon PC hardware as compared with Windows 3.11.

But still the system requirements continued to increase dramatically with each successive revision to Windows.

Windows ME, unlike its two predecessors, did not include the familiar CD Player utility for audio CDs, replacing it with the more complex, multi-functional Windows Media Player, versions of which were then included as the default audio CD player in every version of Windows through to Windows 7.

As it was known to be only a stopgap release before Windows XP, uptake of Windows ME was relatively low, and largely limited to new PCs released during the year when it was the most recent version of Windows available. Most users of existing PCs preferred to stick with Windows 98, which after the release of two service packs had become a highly stable system, unlike the original release of Windows 95.

Hard drive capacities, processor speeds, and RAM fitted as standard on new computers had all been advancing rapidly since the mid-1990s, but so steep were the hardware requirements of Windows XP at the time of its launch that it led to all but the newest computers exhibiting slower responses than the same hardware had managed under Windows 98.

Nonetheless, Windows XP proved a popular Windows upgrade, and by the time it had been the standard version of Windows for several years, the overwhelming majority of Windows users had moved on from Windows 95, 95 and ME.

A major advance of Windows XP over its predecessors was its built-in browser firewall. Whereas Windows 95 and 98 had been easy targets for malware, requiring users to separately install antivirus software, firewalls and malware checkers to protect their computers from hostile programs, there was at least a firewall built into Windows XP and all later versions of Windows.

The next version of Windows after XP, Vista, did not appear for another six years until 2007.

During the intervening years, the cost of RAM and hard drive storage had continued to drop, and the demands of the OS increased to match.

Some of the increased system requirements of Windows Vista were justified by its advanced design aesthetics, which had a subtler and more artistic look than any version of Windows before or since.

However, much of the established PC user community balked at the increased hardware requirements and preferred to stick to Windows XP.

In 2008, soon after the release of Vista, Microsoft also introduced its own free antivirus product called Microsoft Security Essentials, complementing the firewall that had already been integrated into Windows since the launch of XP, and helping to make for a relatively secure browsing experience without the traditional need for paid third-party antivirus software.

Vista had been widely criticised at its launch for placing excessive burdens on computer hardware.

This led to Microsoft somewhat slowing down the rate of increase in system requirements between it and the launch of its successor, Windows 7 (2009).

However, they did not go into reverse – far from it!

Windows 7 required 1 Gb of RAM (twice as much as Vista) in its basic 32-bit configuration, or 2 Gb (four times as much) in its 64-bit version.

Only the hard drive space requirements were slightly softened for the 32-bit version, reducing from 20Gb for Vista, to 16 Gb for Windows 7.

Nonetheless, many of the same users who had rejected Windows Vista because of its hardware requirements now readily embraced its successor, in spite of its requirement of double the RAM needed by Vista.

This was largely a triumph of marketing, as Windows 7 was sold on the promise of the design aesthetic excesses of Vista having been trimmed in the interest of enhanced performance, although the reality of their relative system requirements belies this marketing.

Probably closer to the truth was that in the two years from 2007 to 2009, more users of legacy PCs had upgraded them to a standard of hardware that was now compatible with the requirements of Vista and therefore also those of Windows 7.

The launches of Windows 8 in 2012 and Windows 10 in 2015, exceptionally, saw the system requirements carried over from Windows 7 unchanged.

Improvements in hardware specifications had slowed down since the late 2000s.

(Perhaps the people at Microsoft had taken the criticism of Vista to heart to the degree that it did not feel it could push the boat out much further just yet!)

Windows 8 was Microsoft's most unpopular version of Windows on record thanks to its attempt to push PC users into a mobile device-like interface that could not easily be used without a touch screen. Desktop tiles replaced the traditional Start menu as the primary means of launching programs, for instance. To rub salt into time-honoured PC users' wounds, programs had now been renamed apps as though they were mobile applications.

While Windows 7 had already reversed many of the visual refinements added to Windows Vista, Windows 8 took the quest for aesthetic minimalism to the next level, following the 'flat design' aesthetic that had become common in mobile operating systems by the early 2010s. This arguably made Windows 8 look more basic than any version of Windows since Windows 98. Even the staid Windows XP was subjectively somewhat more stylish.

Uptake of Windows 8 was very low as a result of the radical redesign of its user interface, with most users preferring to stick with Windows 7.

In many respects, Windows 10 was little more than a superficial modification of Windows 8. It still behaved like Windows 8 in most respects. It was slightly restyled, exhibiting a move away from extreme flat design, and had an integral Start menu from the moment of its launch, but continued to refer to programs as apps, and retained most aspects of the less intuitive menu redesign of Windows 8.

Many Windows 7 users continued to reject Windows 10 for all these reasons, until they were pushed into it for reasons of security by the withdrawal of support for Windows 7.

If Windows 95 was bloatware, what exactly should Windows 11 be called by comparison? Kilobloatware+? The fact that computer hardware specifications have themselves increased so much in the years from 1995 to 2021 is surely its saving grace, but even then, its launch has been greeted with some grumbles on account of the fourfold leap in system requirements from those of Windows 10.

In 1995, a typical 1.3 Gb consumer hard-drive running on the IDE interface cost about £200. A Windows 95 installation of 35Mb would have consumed no more than 2.7% of this space. As of November 2021, a 4TB hard drive running on today’s standard interface for consumer-level desktop PCs, known as Serial ATA, can be purchased from BT’s shop for around £100.

A full installation of Windows 11 consuming 64Gb would fill such a hard drive to just 1.6% capacity, showing that for buyers of a brand new high-specification PC today, its hard drive space requirements would be a relatively reasonable proposition pro rata as compared with those of Windows 95 at its date of launch, even though in absolute terms, it seems quite outlandish by 1995 standards, as in those days it would have taken an array of almost 50 complete 1.3 Gb hard drives just to install Windows 11 – if it had been available at that time.