Knowing the Lingo: What's a Meme?

The 'Mobot' has been the most widespread meme to hit the UK in recent times. Simply, it refers to the 'M' shape that Mo Farah made with his arms upon winning his Olympic races this summer.

The statistics are pretty incredible. According to Topsy, a real-time social insight tool, the term "Mobot" trended 12,030 times on Twitter on August 4th, the night of his first triumph.

'Memes' are not brand new concepts.

However, the 'internet meme' and in turn the whole phenomenon of viral marketing has taken on a whole new significance in 2012.

This is why we thought it was time to give you a breakdown of what's most important to know when it comes to internet memes today.

The word 'meme' has been around since the 70's; Richard Dawkins used the term in his book The Selfish Gene to describe 'imitated' behaviours.

Dawkins liked the idea that the word sounded like 'gene'; the idea was that ‘memes' could be just as integral to human nature as genes.

The term as Dawkins coined it was more general than the way it’s commonly used today.

In popular usage, an internet 'meme' can be recognized fairly simply as a concept which goes viral and spreads via the internet.

What Can Be an Internet Meme?

When it comes to successful internet memes, the most important thing to take note of is the fact that originality, humour and social awareness underpin almost all of them.

The actual forms they can take are extremely varied: a particular hyperlink to a piece of content, a video, a song, a rhyme, a picture, a website, a hashtag on Twitter, particular words or phrases, like 'mobot', or even intentional misspellings like the above 'moar!'

Memes can be created intentionally or arise naturally.

Domino's Pizza UK recently saw great results through their manufactured #letsdolunch hashtag by offering genuine incentives to tweeters: the price of their Pepperoni Passion Pizza was cut each time someone tweeted their hashtag.

From a different perspective, some parents have seen photos and videos of their children spread like wildfire without warning.

You can read more about this here: What to Expect When Your Kid Becomes a Meme.

Harnessing the Power of Online Memes for your Business

Creating and harnessing the power of memes for your business campaigns is becoming an important marketing strategy in 2012.

Building brand awareness and a loyal customer base can be assisted by a meme that spreads out to audiences via social media. 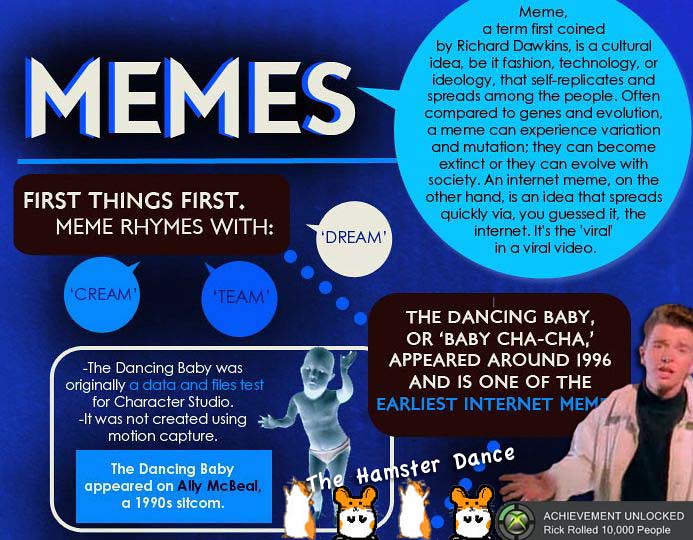 However, there's never a surefire way to predict whether an idea will or won't catch on.

Running competitions like Domino Pizza's is a great way to get started and to build an online customer base, but users will start to get weary if the competitions are too frequent or similar.

The best approach is to use a meme that is as natural and subtle as possible - you may also find that it takes a while for your ideas to lift off, patience and persistence is key.

If your target audience feels as though you're simply enjoying the memes, rather directly promoting your brand, they're far more likely to identify with your message and help to spread it.

Networking and research are also crucial.

A huge part of the success of any meme is down to the fact that people with a mass following have shared the content. Building up influential contacts through your social media channels is always a good move.

Similarly, you don't want to run the risk of creating or sharing a meme that's become obsolete – you can keep up to date with real-time trending sites can help you to keep your finger on the pulse: Reddit, Stumble Upon and Topsy.

These are our tips but if you'd like to throw any more our way we'd be happy to hear them, even better, why not send us a meme?