Thinking Outside the Box (1): Offline Tactics that Get you Noticed Online 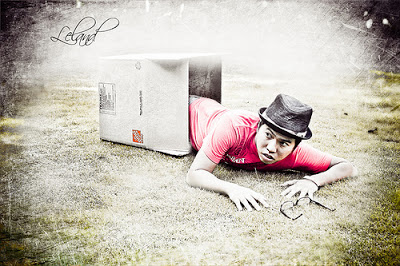 But what do you do when there are a million voices to your one whenever you try and get noticed? Especially if you're a small, local business, you may feel overwhelmingly outnumbered and outpowered.

And yet, people often say that the internet has leveled out the playing field when it comes to smaller companies vs. national or global brands.

Once upon a time, you simply couldn't challenge those who had the budget for mass advertising - TV commercials, press releases, celebrity advocates - they just weren't an option for enterprises on a smaller scale.

The internet has changed all that. What matters today is your capacity to network, think outside the box and be original.

But sometimes it's difficult to know where to start.

Sometimes, this is the kind of thinking that can get you stuck.

All these things are important, but sometimes it's what you do with these different elements to make your business or name stand out from the crowd that matters the most.

If your content marketing strategy involves creating content that looks like everyone else's in your field, it's probably going to be a longer and tougher climb to get noticed.

You may start to match your competitors, but there's no particular reason to suggest you're going to surpass them, even if you are doing more on a daily basis.

"Quality not quantity" is a phrase that's been bandied about the world of online marketing for some time now.

But what does it mean?

One way to look at it is in terms of the creativity spectrum.

A great marketing strategy, as with the best kinds of advertising, can sometimes just be about taking a step back from your usual routine to work out what your business could be doing differently to your competitors.

You just need to think of something that is unique which will catch people's interest.

For the first part of this series, 'Thinking Outside the Box', we've taken a look at some of the creative and successful offline tactics we've seen companies big and small, local and further afield, engage in.

None of these things started out as online marketing efforts, but they were interesting and different enough to get companies noticed across the web and in their hometowns.

How Far Can Offline Go?

Below is an image taken of a large-scale paint ‘spillage’ ingeniously put together by Coop's Paint in Ohio, America.

The giant billboard shows an image of a leaked yellow paint can, which appears to have leaked over the car park below and some cars along the way.

You can see a better example of it here. 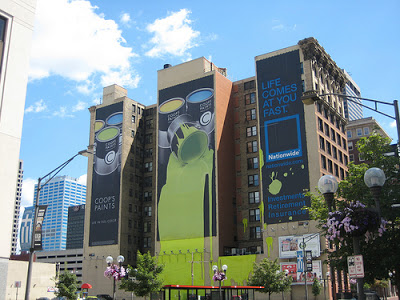 We also loved this campaign by a dental surgery in Germany.

Ergo Direkt didn't want to invest in any old banner, so it found a novel way of getting its message across at a bowling alley.

If you love the above examples but feel disheartened by the sizeable budgets involved, don't!

There is no cap when it comes to the imagination.

With a degree of creativity, even the smallest of businesses can come up with brilliant ideas that will get people talking without breaking the bank. 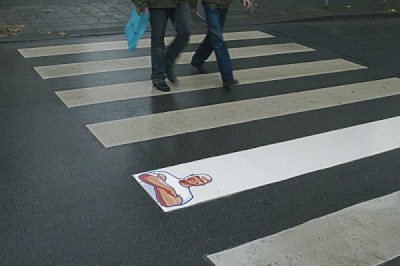 There isn't anything massively high-budget about the above image, but its still a brilliant way to get people to remember the ‘Mr. Clean’ brand. 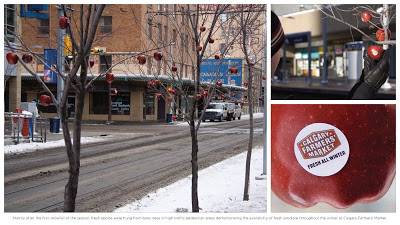 Here is another simple but ingenious marketing tactic - by hanging apples on trees during winter time, Calgary Farmer's Market wanted to underline the fact that fresh food was available throughout the year from them.

Another simple but great idea: in India, a group of Marathon runners representing a glue company pretended to be ‘stuck’ to the starting line of the race. This was a brilliant publicity stunt that caught the attention of onlookers and media outlets around the world.

When the Online World Jumps Out at You in Your Car 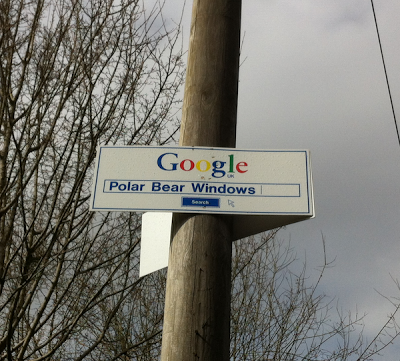 So far we've given you examples of real-world creative campaigns that have gained traction online because they were especially memorable or unique.

But can it work the other way?

Can acknowledging the importance of a virtual presence inform your offline strategy too?

Well, actually, many companies are already showing that this is the case by displaying physical 'like us on Facebook'-type signs in and around their premises.

A couple of companies have decided to be more inventive than this, and one of them is Polar Bear Windows, a local Bristol double glazing company.

The Polar Bears have placed large signs like the one above around their local area in an ingenious effort to get people both to remember them and to look them up in Google. 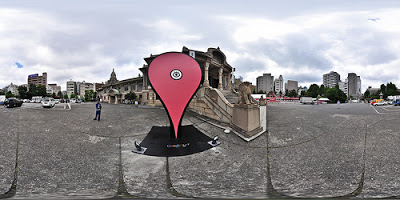 In equally ingenious fashion, Taiwanese designer Shu-Chun Hsiao has modelled his urban birdhouses along the lines of the Google Maps pinpoint symbol - these birdhouses have now become landmarks in his physical area, referred to as much as people might refer to technology to find their way around the city.

Each time they do so, they're likely to be reminded of who put them there.

The result of all of this is that Hsaio is now known as a forward-thinking designer across the web.

There is nothing about this project that required the earth in terms of time or money.